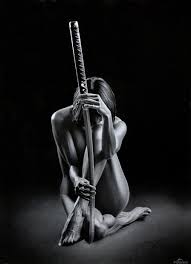 The Lady and the Blade

Coming to us from the United Kingdom is a wonderful literary force we call Alexa. Her first contribution to the Confederacy came in Volume II (The Passion For Life and Fluid Fire, Grounded Wind, Rooted Iron) and she's been with us ever since. You'll be delighted by her prose, stirred by her action, and chilled by her horror.

Genghis Khan once said, "I am the punishment of God...If you had not committed great sins, God would not have sent a punishment like me upon you.”

Janus Rion considers himself to be that punishment and the entire world is the transgressor. And like the conquerors of old, Rion has amassed an army of soldiers unlike anything the world has ever seen. Each one a proverbial Achilles on the battlefield. All save one; one who should have died when his master told him to!

He is the Achilles who has no Troy to fight for; he is the samurai with no master... he is the Ronin!

Alexa is currently working on a follow-up to Enter the Ronin as well as a piece that gives a new perspective on the Siren.